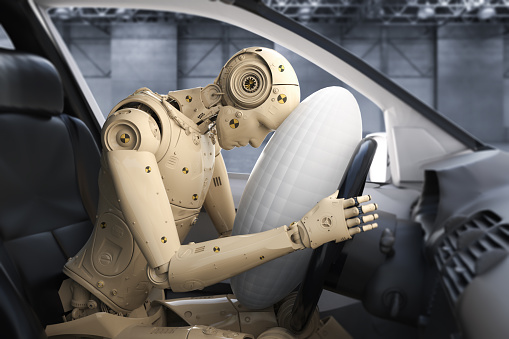 It turns out those commercials you see touting a vehicle's safety by showing footage of crash test dummies in simulated car accidents might not apply to everyone.

The reason why this discrepancy exists, the report says, is because federal crash test standards favor men. Here's what else the investigation uncovered.

A one-size-fits-all approach to crash tests

If you've ever been in the market for a new vehicle and have done some research, you've probably seen car companies reference the National Highway Traffic Safety Administration's 5-Star Safety Rating system.

What you might not realize is the trusted system rates vehicle safety by conducting crash tests with dummies that are almost exclusively the size of an average American male (5-foot-9, 170 pounds).

That means the vehicle's safety features aren't intended to fully protect drivers of all different sizes. Currently, the average American woman is 5-foot-4 and weighs about 170 pounds. This presents a big problem because it's likely that most female drivers have no idea the car they're driving has safety features that were designed for a completely different body type.

The injuries sustained by women in crashes are different and often more severe than the injuries suffered by men.

Look no further than Michigan's Lila DeLine, who miraculously survived a snapped neck when another driver going 60 mph crashed into the rear of her vehicle back in August 2018. Despite being buckled, the seatbelt DeLine was wearing at the time of the crash did not properly restrain her upper body, and the high-speed impact resulted in an "internal decapitation," a catastrophic injury where the victim's skull becomes dislocated from the top of the spine. This type of injury is almost always fatal.

Incredibly, DeLine is able to walk again after doctors literally screwed her head back on. Now, after finding out part of her vehicle's crash protection system might have failed her, DeLine is one of many calling for things to change.

Change could be on the way

The federal government is being called upon by crash safety advocates to update the male and female dummies that are used to conduct safety tests and expand the body types of the models so that they represent more than just the average American male. Even though there are more women licensed to drive than men, the government doesn't force car companies to treat the safety of female drivers the same as male drivers.

One possible replacement for the current models being used is a newer crash test dummy called THOR, which stands for "Test Device for Human Occupant Restraint." THOR has 200 sensor data points and can detect crash impact to body parts current crash test dummies cannot. The Hybrid III, which is the most widely used crash test dummy, has just 10 sensors. THOR is able to collect data on areas of the body more prone to injury on females, such as the legs, pelvis, neck, and chest.

Developed in the early 2000s, it's not clear why the NHTSA has been slow to adopt THOR into its crash tests, as THOR is already being used by many European nations as their standard crash test dummy.

It's clear that the outdated crash test dummies currently being used need to be upgraded so that vehicle safety features are designed to protect drivers of different body types. But no matter how safe car manufacturers make their vehicles, your health and safety are still very much in the hands of other drivers. All it takes is one reckless motorist to turn your whole life upside down in a matter of seconds.

If you were injured or a loved one died in a car accident anywhere in South Carolina, hiring an attorney is often the clearest path toward recovering full compensation for your damages. A lawyer will be able to calculate all your compensable losses, build a compelling case to support your claim, and deal with the insurance company for the at-fault driver so that you can focus your energy on healing.

At Twenge + Twombley Law Firm, we put service to our clients above everything else. We realize how important your case is to you and your loved ones, and we don't take that for granted. That's why we always advocate for maximum financial compensation and promise to fight for every dollar you deserve. We also take car accident cases on contingency, which means you don't need any upfront money to retain our legal services and we only receive our fee if we win your case. It's that easy.

Find out how an experienced car accident lawyer can help with your claim and contact us right away to schedule your free consultation. We serve clients in Beaufort, Hilton Head, Bluffton, and throughout the Lowcountry.