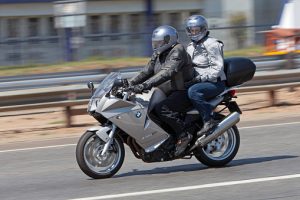 The Facts About Motorcycle Helmets

Lack of helmet use has long been known to increase both the severity of injuries sustained in a motorcycle accident and the risk of death from such injuries. The Journal of Trauma and Acute Care Surgery reports on a study that found helmets to provide comprehensive protection for all types and locations of head injuries. The study also disproved earlier theories that a helmet might cause injuries to other parts of the head or neck, due to the mass it adds to the head area.

Reuters also reports on a study which found that motorcycle passengers are less likely than drivers to wear helmets. As a result, they are more likely to suffer traumatic brain injuries in a motorcycle crash.

Laws that require helmets have been found to increase helmet use (which, in turn, decreases fatality rates in motorcycle accidents). A study reported in Injury Prevention found that a new Italian mandatory helmet law, coupled with police enforcement of the law, were effective at preventing traumatic brain injuries in all age groups. The law was also associated with a dramatic increase in helmet use, from only 19.5 percent before the law was implemented to 97.5 percent after the law was in effect. The Centers for Disease Control and Prevention also reports that state laws that require universal motorcycle helmet use are effective at increasing helmet use.

Hilton Head received a tragic reminder of just how dangerous motorcycles can be in October 2017. The Island Packet reports that a young father, just 22 years old, was killed in a collision with a minivan. The van had attempted to turn into a driveway ahead of the motorcycle. The rider swerved in an attempt to avoid the van, but was thrown from his bike and killed. He was not wearing a helmet at the time of the collision.

This and many other tragedies remind motorcyclists of the importance of wearing helmets. Whether the rider is a driver or passenger, and regardless of whether the state the rider is currently in requires helmet use, the risk of injury and death will be decreased if the rider is wearing a helmet. However, it's important to remember that while helmets do prevent some injuries, they are far from the entire story when it comes to motorcycle safety. Motorcyclists who are injured while not wearing a helmet may still be entitled to compensation for their injuries. The fact that the injured rider was not wearing a helmet does not absolve the at-fault motorist of responsibility for their actions.