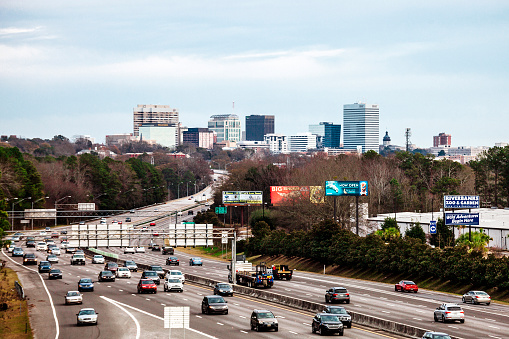 A new traffic law goes into effect this month in South Carolina which is intended to prevent car accidents on highways throughout the state. Known as the “move right law,” this law requires drivers on state highways to move over to the right if they’re in the left lane and another, faster vehicle approaches from behind.

“If somebody comes up behind you to pass you, it’s going to be your responsibility to move over,” South Carolina Highway Patrol Master Trooper David Jones said in an interview with News 19 in Columbia, South Carolina.

The new law goes into effect on Aug. 15, 2021. The law applies to all multi-lane, limited-access highways and interstates in South Carolina, including Interstate 95 and I-26.

What is the ‘move right’ law?

Passed unanimously in March by South Carolina’s House of Representatives and signed into law by the state’s Governor in May, H3011 amends Section 56-5-1885 of South Carolina’s Code of Laws, stating that drivers in the far left-hand lane on a controlled-access highway must move to the right when another vehicle approaches from behind. Signs will be posted every 35 miles on all interstates in South Carolina informing drivers of the new law.

“What we’re wanting to remind motorists of, is if you're on a two-lane highway, the left lane is for faster traffic," Trooper Jones said to News 19. "If there's a vehicle approaching you from behind that’s moving faster than you are, by law you’re gonna be required to move over.”

When slower vehicles stay in the left lane instead of moving over, Jones added that traffic becomes congested and then other motorists make poor decisions. Road rage can also take effect, and some of those drivers make aggressive maneuvers that cause crashes.

What are the penalties for breaking the new law?

The first 90 days after the law goes into effect on Aug. 15, South Carolina state troopers will issue warnings to drivers who stay in the left lane and don’t move over to make way for faster-moving traffic.

However, after the 90-day grace period expires in November, slower drivers who continue to drive in the left lane on highways without moving over to the right could be fined $25 for breaking the new law.

Why do highway accidents happen?

Highway accidents in South Carolina and throughout the country often occur because one driver was behaving in a reckless or negligent manner. Along with driving excessively slow in the left-hand lane, other common causes of highway accidents include:

These are just some of the reasons why bad car accidents happen on highways in South Carolina. Whatever the cause of your crash, make sure you take your accident seriously right from the start. Call the police, seek immediate medical attention, then contact a lawyer.

You might think you don’t need an attorney if you were injured in a highway accident and another driver is to blame. The state police and insurance companies can take care of everything, right? Don’t be so sure. South Carolina Highway Patrol troopers focus on determining why your accident happened, not whether you are fairly compensated for your damages. As for insurance companies, the at-fault driver’s insurance provider will likely do everything they can to reduce or deny your accident claim. That’s because your accident-related expenses pose a threat to their bottom line.

At Twenge + Twombley Law Firm in Beaufort, we know what’s at stake. That’s because our attorneys have years of experience handling car accident claims in Beaufort County and throughout South Carolina. As a result, we’re familiar with the constantly changing state and federal laws that apply to motor vehicle accidents. We know which legal strategies can be effective. We also know how to negotiate with insurance companies and demand the money injury victims rightfully deserve.

Learn more about how we can help you after your car accident. Contact us and schedule a free case evaluation at our Beaufort, South Carolina office today. We proudly serve clients in Beaufort, Hilton Head, Bluffton, and throughout the Lowcountry.