Mr. Johnson is an associate representing both plaintiffs and defendants in complex civil litigation matters, including commercial and business litigation, estate and probate litigation, and serious personal injury litigation. 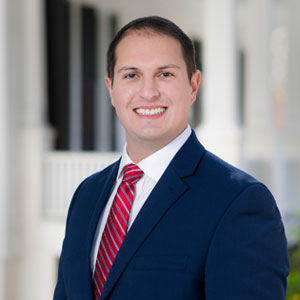 Mr. Johnson is a summa cum laude graduate of the Charleston School of Law where he was a Presidential Honors Scholar and finished in the top three of his graduating class. While in law school, Mr. Johnson was a Legal Research and Writing teaching assistant for two years and was appointed to the Honor Council by his peers. He further served as President of the Business Law Society for two years and received multiple CALI Awards for the highest grades in his classes.  Upon entering his second year of law school, Mr. Johnson became an Articles Editor for the Law Review where he authored a publication titled Rule 68 and the High Cost of Litigation: The Best Defense Weapon of Which You’ve Never Heard and its Missed Opportunity to Promote Settlement. He was selected to the Moot Court Board, which gave him the opportunity to compete nationally at the Judge John R. Brown Admiralty Moot Court Competition, where he took home the award for Best Oral Advocate. Finally, Mr. Johnson was selected to the Trial Advocacy Board his second year and received the award for Best Direct Examination during competition. In addition to his school activities, Mr. Johnson worked both as a summer associate and as a law clerk during the school year for multiple large Southeast civil defense litigation firms.

Prior to joining Twenge + Twombley, Mr. Johnson served as a Judicial Law Clerk for the Honorable Benjamin H. Culbertson in the Fifteenth Judicial Circuit of South Carolina.